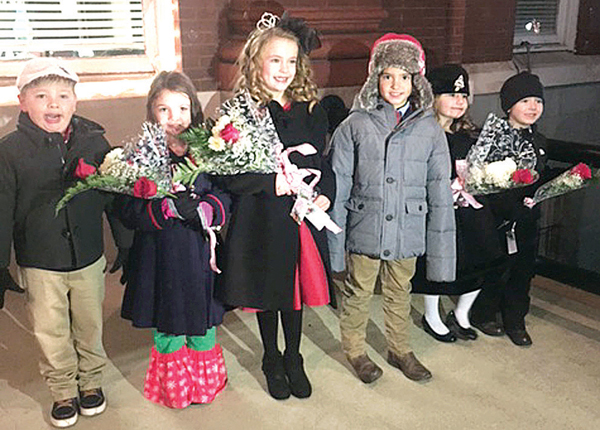 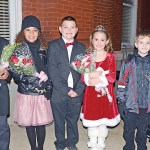 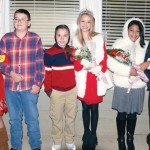 STANFORD – Snow Queen wasn’t the only title handed out at the annual Lincoln County Chamber of Commerce Christmas Parade, with multiple royals crowned leading up to the crowning of the queen.

Taking centerstage on the courthouse steps ahead of the Snow Queen contestants were the Snow Princess, Snow Duchess and Snow Countess candidates ranging in age from 4-years-old to middle school.

The first royal crowned was the Snow Princess, and that title was won by 6-year-old Hadley Tate Spoonamore. Spoonamore, who said that what makes her special is that she has a twin brother, was escorted by her twin, Hudson. They are the children of Street and Erica Spoonamore of Stanford.

First runner-up in the contest was Reese Friend, 5, the daughter of John David and Mary Friend. She was escorted by Lucas Lawson, son of Ed and Clara Lawson of Stanford.

Isla Edwards, 4, was named the Snow Princess second runner-up. Isla, the daughter of Robbie and Sara Edwards of Hustonville, was escorted by Chase Cole, son of Jason Cole and Holly Lawson of Stanford.

Baylea Skye Snow, 9, came away with the Snow Duchess title. Baylea, the daughter of Greg and Misty Snow of Stanford, was chosen out of five candidates to wear the crown. Her escort was Jake McFarland, son of Arlena and Jeremy McFarland of Hustonville.

First runner-up went to 9-year-old Kyleigh Benedict, daughter of Maurice and Kristian Bell of Stanford. Her escort was Demani Bell, son of Maurice Bell.
Second runner-up was Rylee Kate Mullins. Rylee, 8, the daughter of Ricky and Kelly Mullins of Stanford, was escorted by Kendall Patrick Smith, son of Tim and Paula Smith of Stanford.

Sierra Smith was candidate #2 in the Snow Countess contest, but she was deemed as the top candidate by judges, selected out of a field of eight 10-middle-school aged girls to wear the crown. Smith, 11, the daughter of Kenny and Tammy Smith of Stanford, was escorted by Elan Lane, son of Darin and Diana Lane of Stanford.

Alexandra Caudll, 12, was named the Countess first runner-up. Alexandra, the daughter of Contessa Jones of Stanford, was escorted by Brandon Swinney, son of Brian and Stephanie Swinney of Stanford.

Second runner-up was MaKayla Greer, 10, daughter of Mike and Patty Greer of Waynesburg. MaKayla’s escort was her brother, Jimmy Greer.

The remaining candidates, their parents and escorts in each royal division were:

STANFORD – A Lincoln County man who was allegedly under the influence of methamphetamine is facing several charges after resisting his... read more