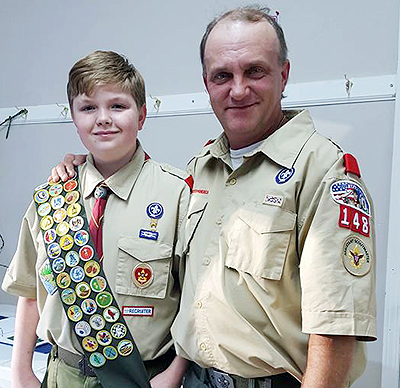 At age 13, Cadin Adams has earned the distinction of being what is believed to be the youngest Eagle Scout in the 89-year history of the Boy Scout movement in Lincoln County.

Considering his Scouting pedigree, that is not at all surprising. His grandfather and Scoutmaster Robert Bowen, Sr. has produced 15 Eagle Scouts in his 32 years as a Scoutmaster of Troop 148 in Stanford. Adams’ uncle, Robert Bowen, Jr., was only nine months older when he earned his Eagle Award in 1985.

Adams was officially presented his Eagle Scout Award on Oct. 22 in a Court of Honor ceremony held in the fellowship hall at the Stanford Church of the Nazarene where he is an active member.

While Scouting has certainly been a tradition of the Bowen men, his uncle (Bowen, Jr.) explained that it was a female influence that got the family into the Boy Scout movement.

“A lot of people think it was my dad that got me involved in scouting, but it was actually my mom,” Bowen Jr. said.
His mother, Brenda, became a Cub Scout leader and when he moved up to Boy Scouts, his dad who had become Cub Master of Pack 148, took over as Scoutmaster of Troop 148 shortly thereafter.

In order to achieve Eagle Scout, Adams had to earn a minimum of 21 merit badges. A merit badge requires a Scout to develop and demonstrate skills in a particular course of study. In Adams’ case, he had to earn merit badges that not only reflected the traditional scouting curriculum such as camping, first aid, emergency preparedness and citizenship, he also had to show skill in a revamped and new list of merit badges. Starting in 2014, the Boy Scouts of America made the cooking merit badge a requirement for the Eagle Scout Award.

In addition to the usual cooking outside on a campfire, the cooking merit badge now stipulates that the Scout must also demonstrate the ability to cook in an indoor kitchen setting. Adams also earned the Sustainability Merit Badge, which was brought on board in 2013 by BSA, that has an emphasis on “green” living.

In addition to earning the required merit badges, Adams had to oversee an Eagle Scout Service Project. Adams, with the financial assistance of the Stanford Rotary Club, refurbished benches at the Veterans Memorial Park in Stanford. He and his fellow scouts devoted dozens of hours to the project.

The Court of Honor was opened in prayer by Adams’ pastor Rev. Buford Edwards followed by the presentation of a proclamation on behalf of Lincoln County Judge-Executive Jim Adams, an Eagle Scout certificate from the Major James H. Bridgewater Camp 7 of the Sons of  Union Veterans of the Civil War and Stanford Mayor Eddie Carter who declared October 22 as Cadin Adams Day in Stanford.

David Gambrel, who serves as the Committee Chair of Troop 379 in Waynesburg, served as master of ceremonies. He reminded Adams of the four-fold duties of a scout: service to God, country, his fellow man and lastly to himself.

Adams, an eighth grader at Lincoln Middle School, then presented his parents with the traditional Eagle parent’s pins and then surprised his uncle (Bowen, Jr.) with the “mentor” pin. The mentor pin is given by the Scout to the individual who had the greatest influence on him achieving Eagle. In turn, Bowen Jr. presented his nephew with the same Eagle Scout ring his parents had given to him in 1985.

Adams will also become the youngest to earn his Eagle Scout palms since he has already earned a total of 41 merit badges and only 36 are required for all the palms. It is believed that the first scout troop in Lincoln County was started by R.K. Lowe in 1927 in Kings Mountain and the following  year Troop 148 was established in Stanford and has been in operation since.

SO YOU KNOW:
Troop 148 meets every Tuesday night at 6 p.m. at the Bowen’s home on Danville Avenue. Membership is open to young men between the ages of 11 and 18 or those who have finished the 5th grade.