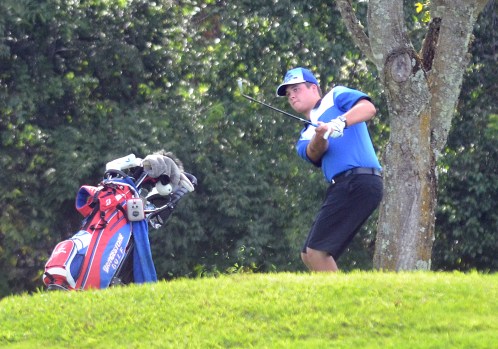 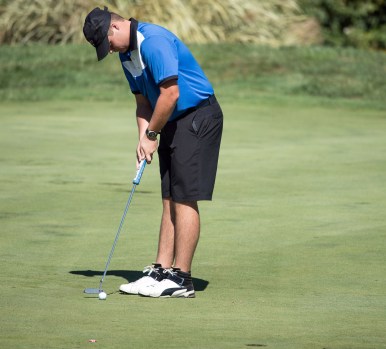 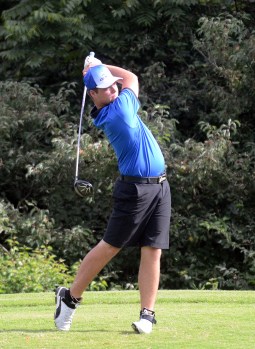 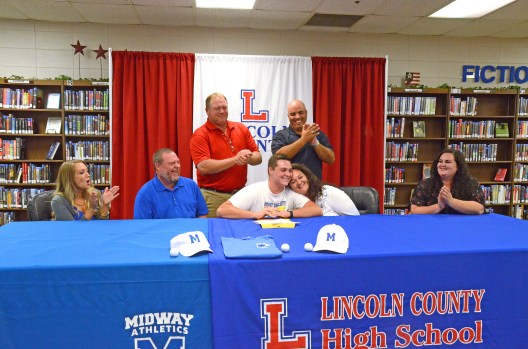 LINCOLN GOLFER Parker Monhollen, center, gets a hug from his mom, Erica Monhollen, after signing his letter-of-intent to play for the Midway University Eagles golf team. Also in on the signing celebration are, front row, Parker’s sisters Justice Monhollen and Aly Bryant, and his dad, Delbert Monhollen, and in back, Lincoln boys’ golf coach Scott Montgomery and Midway men’s golf coach Otis Smith. Photo by Nancy Leedy

STANFORD — When Parker Monhollen picked up the game of golf as a child, he had no idea it might someday pay off with a college scholarship.
After all, when Monhollen hit middle school he decided to give up the game. However, a move to Lincoln County High School brought a change of heart.
“I’ve been playing golf since I was really young, but I had a break. I quit playing golf around seventh grade,” he said. “Then, when I moved to Lincoln County, I decided I wanted to start playing golf again. I kept working at it, playing golf in the snow. I’m like, ‘I’m going to get me a college scholarship for this.’”
And that’s just what he did.
Monhollen publicly announced his commitment to play for Midway University last Thursday at LCHS as his parents, Erica and Delbert Monhollen of Bryantsville, his sisters, grandparents, friends and teammates looked on.
Lincoln boys’ golf coach Scott Montgomery presided over the signing ceremony and was the first to offer congratulations to Monhollen.
“Parker has done well. It’s an honor to have been able to have worked with him and all of them and to see the rewards of hard work,” he said. “I want to congratulate Parker and wish him the best. I think he’ll do very well. All of his teammates are here to watch and support him, and that’s the way they’ve been all year.”
Monhollen, who plans a career in sports medicine, said making his college choice was easy.
“You’ve got to be a student before you are an athlete and they have a good sports medicine program,” said Monhollen. “I wanted to get an education and to play golf and being able to study something that I really like is going to help a lot.”
The Patriot golfer did test out other schools before making his final college pick.
“I looked at St. Catharine’s before they shut down. I looked at Asbury, Georgetown and Coastal Carolina. But then Midway hit me up and I’m like, ‘Man I really like this college,’” he said. “I just think it’s a good place for me. It’s small. It’s something I would like. I wouldn’t like a school with too many people in my classes. And Otis (Smith, Midway men’s golf coach) is a good guy.”
Monhollen first ran into Smith over the summer and that is when Smith’s interest in the Lincoln golfer was piqued.
“I met him at a junior golf tournament over the summer. I saw the way he hit the ball. I saw his mannerisms on the golf course. It seemed like he had a lot of talent, just natural raw talent,” Smith said. “For him to be playing the way he was playing and hitting the way he was hitting, he would attract the attention of any coach. I was intrigued.”
“He shot a pretty good score and I talked to him after the round and I asked if he’d like to come visit,” Smith said. “We kept in contact. And a few weeks later he came up and then we have this today. He loved the campus, the educational opportunities. And he got to visit and practice with the team and workout so he knows what it will be like when he gets here and what I expect out of him.”
Monhollen is joining a newly developed golf program at Midway University. The formerly all-female college fielded its first men’s golf team this fall season, with Smith, the Midway women’s coach, taking on the men’s coaching duties as well.
While a newer sports program, Midway men’s golf, playing in the NAIA and River States Conference, is not without a full team. The members of the St. Catharine’s men’s golf team were offered scholarships when the Springfield school closed to give the team a good base.
“It’s a building process but I think it’s going to be good.” Monhollen said. “The team they have now is loaded. They are a really good team. Then they’re bringing me in and a few other guys that I know of so they might be favored to win.”
“I know I’m excited about getting the opportunity to play,” he added. “It’s been a dream to get to play college golf. He’s given me the chance and I’ve got to go put out for him and show him what I can do.”
Smith feels Monhollen will be an asset to the Midway men’s golf team.
“He’s got a bright future ahead of him and Midway, with him being a part of the team, has a great future ahead as well,” Smith said. “I’m looking forward to having Parker come to Midway. He’s a driven kid and I’m anxious to see how he develops over the next four years. He knows what I’m expecting out of him and hopefully he’ll be competing for some national championships at Midway.”