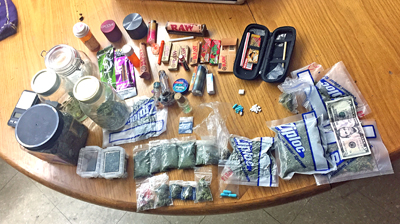 Photo courtesy of Lincoln County Sheriff’s Office A man was arrested Sunday afternoon after deputies found him asleep in his car and allegedly in possession of marijuana, Xanax and an assortment of drug paraphernalia.

KINGS MOUNTAIN – A man found asleep in his car in a local store parking lot was arrested on drug charges after Lincoln County sheriff’s deputies looked into the vehicle and saw a baggie of suspected marijuana between his legs in plain sight.
Hunter Simpson, 20, of Nancy, was arrested Oct. 30 at about 3 p.m. by Deputy Michael Mullins and charged with first-degree trafficking in marijuana (less than eight ounces), possession of a controlled substance and possession of drug paraphernalia.
Mullins said he was dispatched to the Family Dollar Store at the intersection of Ky. 501 and U.S. 27 where he found Simpson asleep in the driver’s seat of a Ford F150 pick-up truck.
“In plain sight in the seat between (the) subject’s legs was a small clear baggie containing (a) green, leafy substance believed to be marijuana,” the arrest citation states.
Simpson told law enforcement that he was coming back from a festival in Mercer County and pulled over to sleep when he got tired.
Mullins said he also found a small glass jar in Simpson’s right front pocket with three suspected xanax bars, some broken up bars and a “small, crystal-like block” which he told deputies was a “xanax block.”
Deputies were given consent to search the vehicle where they allegedly found a black case with several individually packaged bags of suspected marijuana, rolling papers, glass pipes, two grinders and a lighter.
Simpson told Mullins he purchased the items at a festival the previous day, according to the citation.
“In a backpack in the same area of the truck was two more jars containing suspected marijuana and some other paraphernalia such as scales and more rolling papers,” Mullins said.
Simpson was arrested without incident and lodged in the Lincoln County Regional Jail but has since been released, according to jail records.
Mullins said Deputy Griffin Harness assisted in the arrest.