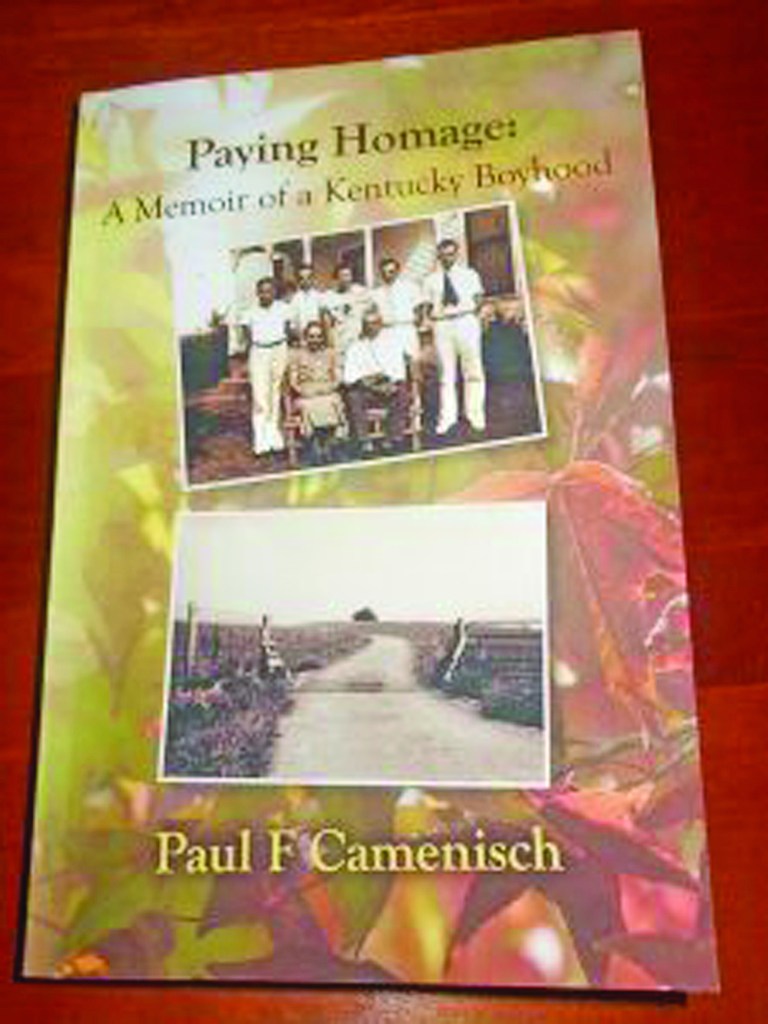 A new book by Danville native Paul F. Camenisch of Indiana tells his story about growing up with family in Lincoln and Boyle counties. The top photo is of the Camenisch family gathered in front of the old homeplace in Lincoln County in about 1936. Lena and Christian are seated in the front. Back row, from left, are: Robert, Doris (barely visible), John, Lucille, Paul and Richard.

Lincoln County native Paul F. Camenisch has written a book about his memories of his home in the country.
The 457-page soft-bound book begins with the first Camenisch family who came to Kentucky in the mid-1880s from Portein, Graubunden, Switzerland.
Paul’s great-grandparents Christain and Anna Camenisch and great-great Uncle Alexander Camenisch made the trip to the United states and purchased a farm in rural Lincoln County.
Christian and Alexander were children of Johannas and Margaret Lanicca Cameninsch, who remained in Switzerland.
Visits familiar sites to research
The book was written after several visits with his Uncle Richard Camenisch who lived at the family farm. Paul also researched records at the county courthouse, History Museum and library gathering historial information about the family.
Allen Leach, a local genealogist, helped with research on the Camenisch farm.
It was purchased from George W. and Martha J. Alford June 1, 1883, by Alexander and Christian Camenisch. The farm has 162 ¾ acres on Turnersville and Coffey’s Mill Road on the waters of Hanging Fork. It also included 89 acres of knob land. Cost was $10,559.90. They took possession in January 1884.
The land was part of 400 acres in a land grant to William Casey.
After they were settled on the farm, 53-year-old Christian went back to Switzerland to get his wife, Anna, and eight of their 10 children. Two daughters chose to marry and stay in their native land.
Paul’s mother was a Kissling from Louisville and her family was connected to the Camenisch, Seewer, Gander and von Gruenigen families in Lincoln County before she and Christian were married.
The Kissling family also was from Switzerland and first settled in Tennessee before Frederick Kissling came to Louisville and and married Emma von Gruenigen.
The book mentions all the family names associated with the Camenisch family.
The Camenisch name is derived from “Ca,” for “house of,” and “Dominicus” for “lord” or “master.”
The Camenisch families dominated the village of Portein in Switzerland. The 1830 Census lists 51 residents and 33 were Camenisches. They listed their religion as Protestant.
When the Camenisches came to America, they came by rail to Genoa, Italy, crossed the North Atlantic to New York before arriving at the Lincoln County destination.
One of the reasons Christian brought their family to America was to escape from them serving in the Swiss army, but many served with the United States military during World War II.
Paul’s family lived on Alta Avenue in Danville where the Camenisch children attended school and church and help out at Swiss Sanitary Milk Co. operated by his father and uncle Paul Camenisch.
He shared his feelings of loss after the old Broadway School burned, old Danville High School on Walnut Street was razed and Second Presbyterian Church closed for services.
His fondest memories were when he and his siblings John and Doris visited his grandparents in the Turnersville community when they ran through the cow pastures skipping the ”fresh cow piles” to play in the creek and enjoyed their grandmother’s cooking.
He recalls the changes in the highway from Danville to Stanford and the people who lived along the way. He learned the small community once had post office and school and he remembers the store that stood too close to the intersection of Ky. 78 and Ky. 198 heading towards McKinney.
Traveling back in the time of his childhood refreshed the wrtier’s memories of his grandparents, uncles and aunts who lived on farms in the country. Tobacco fields, beef cattle, bumpy roads, wire fences and numerous gates to open before one could get to the farmhouse.
When Paul returned to his “safe place” at his grandparents’ house he saw all the familiar things that reminded him of his grandparents.
A spring house that provided water for the family. Barns, outbuildings and pastures with cattle and crops reminded him of places he explored. A comfortable bed in the attic was awaiting for him in the evening.
While talking to his uncle Rich, Paul learned it was not always a happy place as he saw it as a youngster and he still thinks it is “the safest haven the world has yet offered to me.”
“You guys saw this as a happy place; but there was sadness here too,” Uncle Rich said.
“What I learned from all this greatly enriched my understanding of and my respect for the family into which I had been born, for their determination to build a new place and life in their new country, for their integrity and honesty, for their persistence in the hard life that farming was, a life that brought them pleasure and perhaps joy, it also brought sadness, even tragedy and loneliness.”
He also discovered the beauty and complexity of lives that many would dismiss as ordinary and outdated.
(Paul F. Camenisch, who grew up in Danville, is a graduate of Centre College, and is a retired teacher and an administrator at Chicago’s DePaul University. He and his wife, Bonnie, have three grown children and divide their time between the Chicago area and Albuquerque, New Mexico.)